How Does Fatigue Affect Truck Accidents?

A towering big rig speeding down the highway is an imposing sight. San Diego, like most of Southern California, has hundreds of these vehicles crowding our freeways every day. And many of the drivers could be suffering from fatigue and exhaustion. Up to 20 percent of the large truck accidents on California highways involved fatigued or sleepy drivers. What is it about being tired that causes accidents? And what is being done to prevent truckers from dozing off at the wheel?

Zoning Out at the Wheel

In a study carried out by the Governors Highway Safety Association (GHSA), researchers found that staying awake too long has the same effects on the brain as drinking too much alcohol. As few as eighteen hours without sleep is the same as having a blood-alcohol level of .05 percent. Three hours later, you are displaying the same symptoms as someone with a BAC of .08 percent–legally drunk.

Despite regulations requiring truck drivers to take regular breaks, the industry is known for pushing drivers to spend long hours in the cab on the road. Fatigue results from a combination of insufficient rest, inadequate meals, and monotonous work. Add sleeplessness to that, and you have a recipe for disaster. 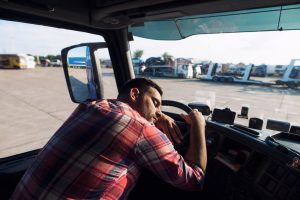 Fatigue contributes to big rig accidents in some specific ways:

Because of the size and characteristics of trucks, a fatigued driver is a hazard on the road. Trucks need more time to brake than even the largest passenger vehicle, and there is a distinct lag time between the truck and the trailer when the driver attempts to turn or swerve. The size of the blind spots for the driver of a commercial truck means that even an alert driver cannot see anything to the sides or rear of the trailer.

Beginning in 2018, the Federal government began requiring “black boxes” on large commercial trucks, like the flight data recorders used in airplanes. These recorders monitor the truck’s performance and how the driver handled the truck. The driver is also supposed to enter their drive time, rest breaks, and sleep time in their driver’s logs.

If you have been involved in an accident with a big rig or other commercial vehicle, obtaining these logs is important in establishing liability in the case. Older model black boxes may overwrite the data in just a few days. New models may take as long as 30 days to overwrite the information. Federal regulations require that the trucking company retain the information for six months. You can have your attorney send a letter of spoliation to the trucking company to advise them that they must retain the data. You should take this step as soon after the accident as possible, even if you do not plan on legal action immediately.

If you have been involved in an accident with a big rig or other commercial vehicle, you need someone to help you protect your rights. Let the San Diego truck accident attorneys of Jurewitz Law Group Injury & Accident Lawyers answer your questions and get the information you need to file your claim. We will diligently help you pursue the compensation you deserve. Call our legal team at (619) 233-5020 right away. The call and the consultation are free.