San Marcos Police Get Training To Deal With Aggressive Dogs 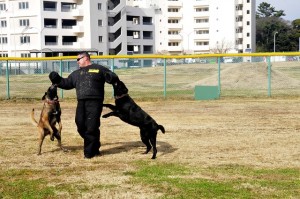 Thirty-one aggressive dogs have been shot and killed by deputies throughout San Diego County since 2010 — and six have been shot so far this year. In many of these instances, the dogs are unleashed and are exhibiting what deputies perceive as aggressive or threatening behavior.

Prompted by an email sent to the San Marco’s Sheriff’s Office by a North County woman who was concerned after 4-year-old-pit bull was shot and killed by deputies in unincorporated San Marcos, the department decided to launch a two-week pilot program to teach deputies how to respond to aggressive dogs.

While deputies are sworn to protect the public from potentially dangerous dogs (in 2012, 75 percent of the California dog attack fatalities occurred in San Diego County), the captain who runs the San Marcos sheriff’s office said, “No deputy wants to shoot a dog. It’s traumatic for these deputies. It’s very emotional.”

The training was put together in conjunction with the North County woman, her colleagues and the San Marcos Sheriff’s Department. It will include five 10-minute videos released last year by the federal Department of Justice through the Community Oriented Policing Services Program.

The last shooting of an aggressive dog by a San Marcos deputy occurred on May 26. Deputies were responding to a call of aggressive pit bulls on the property of a house. Reportedly, when the deputies tried to contact the residents, they were charged by three pit bulls. One of the dogs was fatally shot and the others ran away.

Other law enforcement departments are thinking of adopting similar training programs, including Oceanside and the San Diego Police Department. San Diego police have shot 18 dogs since 2010.

The San Marcos injury attorneys at the Jurewitz Law Group Injury & Accident Lawyers in San Diego laud the attempt of law enforcement agencies in the San Diego to deal with aggressive dogs in a less violent way. This still doesn’t absolve an owner’s responsibility should an aggressive dog attack and injure another person. If you have been injured in a dog attack, call us toll-free at (888) 233-5020 or contact us online. You may be entitled to compensation for medical bills, hospitalization and other damages.