Gotta Catch ‘Em All…Gonna Catch a Fall! Why the Pokemon Go Craze Could Lead to Injuries 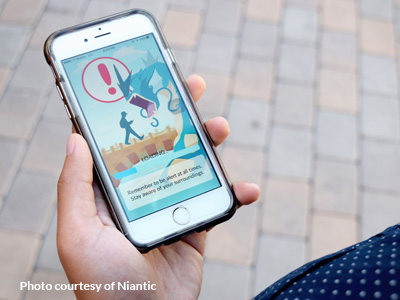 So, how did you spend your weekend? Did you happen to take a walk or even a drive through your neighborhood and notice anything different? Did you notice small groups of people huddled together repeatedly glancing at their phones? Did you notice people seemingly oblivious to their surroundings wandering around while playing some sort of game on a mobile device? Do you STILL notice this happening around your work and home???

If so, you’re definitely not alone. You, in fact, are witness to the most recent craze overtaking the nation – Pokemon Go, a new mobile app for iPhones and Android devices that allows users to catch Pokemon (Pocket Monsters) and collect in-game usable items from various checkpoints found throughout its “real world” map. However, just because it’s a virtual world doesn’t mean that users are immune from real physical harm.

The mechanics of the game are simple – using your phone’s GPS, the game allows users to create an avatar that travels wherever you go, literally. When playing the game, users are shown a real world map that includes various virtual “Pokestops” and “gyms” for doing battle, as well as a variety of Pokemon wandering about just waiting to be captured. Because users often have their faces buried in their phones while playing, there is an increased risk in the likelihood that a user may trip, wander into traffic, or potentially cause an accident that could injure not only themselves, but also other people around them. Pedestrians aside, some drivers are even guilty of playing the game while operating their vehicles, a huge distraction that greatly increases the likelihood of an accident taking place.

While this game is definitely a nice way to get people up and out of the house and moving around, it may also be adding to the growing problem of distracted pedestrians and drivers. This was illustrated this past weekend in San Diego when a group of young adults playing the game were nearly run down by a high speed police chase in progress. The Pokemon Go players were crossing a street while playing the game when a pickup truck being pursued by police roared through an intersection, nearly hitting them. Fortunately, there were no injuries, but the incident points out the need for all pedestrians to follow traffic laws and always remain alert and mindful of their environment at all times, both day and night.

In recent years, a growing number of injuries have been attributed to pedestrians distracted by their smart phones, whether it be playing games, texting, or checking social media sites. For instance, a Minnesota man was killed by a commuter train last year because he was looking at his phone and not paying attention to his surroundings. Other less fatal injuries have also been reported, including people being hit by cars, tripping, twisting ankles, and colliding with objects or other pedestrians that were also distracted.

We at the Jurewitz Law Group Injury & Accident Lawyers urge all San Diego area pedestrians and drivers to remain vigilant and not be distracted by any electronic device, no matter how addicting a mobile app might be. If you have been injured by a distracted pedestrian or driver, you may be entitled to compensation for your injuries if it can be determined that the other party’s negligence contributed to those injuries. To find out more about your legal rights and options, call our offices for a free consultation at (888) 233-5020.