3 of the Most Bizarre Christmas Traditions around the World 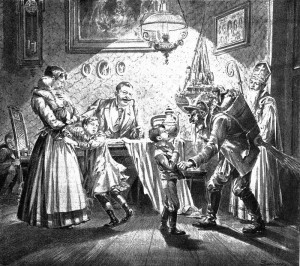 Christmas means hanging up socks and lights, giving gifts, singing carols, feasting on fat-laden foods, etc. Well, those are the customs Americans are familiar with, at least. But we’re not the only ones in the world that celebrate Christmas. In fact, people in more than 160 countries join in on the festivities! And while all of us share certain traditions, in some parts of the world, you may find unique and quite plainly bizarre twists on this much beloved holiday.

Everyone knows Santa Claus, who also goes by the name of Father Christmas or St. Nicholas. But did you know there’s a much more malicious figure out there that, rather than bringing holiday cheer to people the world over every December, brings misery? Enter Krampus, the anathema of Christmas spirit, the anti-Santa, the punisher of naughty children. In Austria and other parts of Europe, the wicked horned creature has a night dedicated to him on December 5th, on which people dress as Krampus and dispense coal and bundles of sticks while striking fear into the hearts of little ones.

In America, the centerpiece of Christmas dinner is usually baked ham or turkey. In Japan, it’s Kentucky Fried Chicken. Around four decades ago, the widespread fried chicken chain embarked on a highly successful marketing campaign that tied Christmas to their product in the minds of the Japanese. Since then, they have made a tradition of eating KFC every Christmas, and this tradition has been passed down for many generations in spite of its commercialized origins. It is predicted that more than 240,000 barrels of chicken will be sold in Japan’s KFC restaurants during Christmas this year.

This midwinter tradition in Wales is a holdover from pagan celebrations before Christmas was introduced. The celebration of this archaic holiday, in its purest form, involves the arrival of a horse and its party at the entrance of a house or pub. After the party sings several introductory verses, they engage in a battle of wits with the people inside, exchanging challenges and insults in rhyme. After the battle is over, the greeting party sings another song.

Do you know of any other strange Christmas traditions? Please share your favorite ones with us on the Jurewitz Law Group Injury & Accident Lawyers Facebook page.