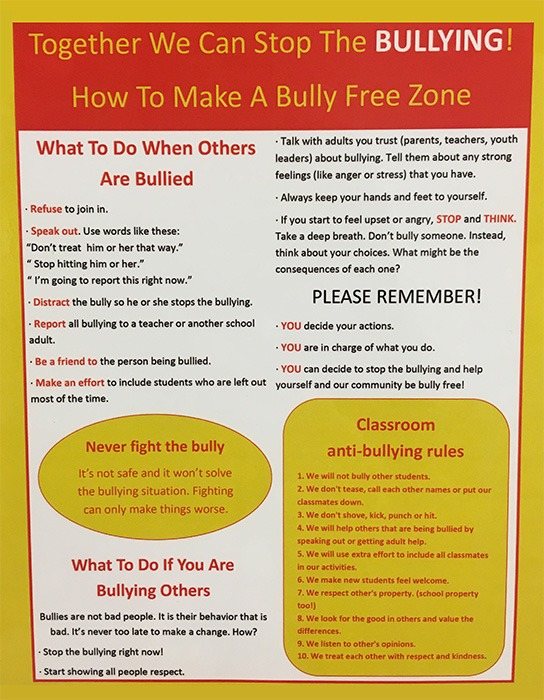 The Jurewitz Law Group Injury & Accident Lawyers proudly donated $1‚250 to the National City Police Department’s (NCPD) anti-bullying campaign. Our sponsorship will enable the NCPD to pass out 500 magnetic memo boards to the public for free to help enhance Emergency Safety Awareness in the community and enable police officers to educate 4th graders on how to deal with bullying.

Phil’s BIG BBQ at the Ballpark 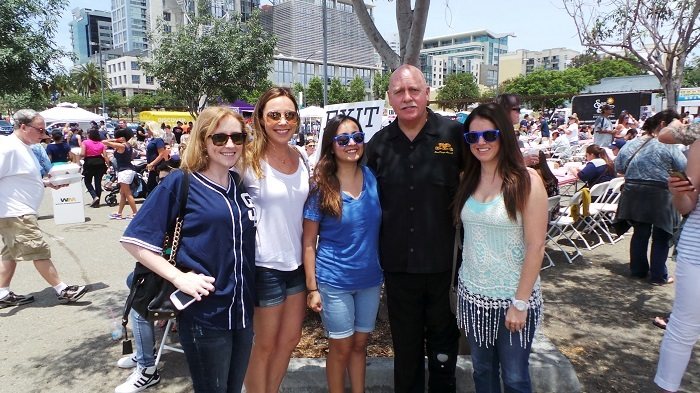 Jurewitz Law Group Injury & Accident Lawyers and about 2‚000 other attendees came out to enjoy a plateful of Phil’s BBQ‚ watch the Padres take on the Diamondbacks‚ and most importantly help raise money for Big Brothers Big Sisters Operation Bigs Military Mentoring Program on June 28‚ 2015! All proceeds from Phil’s BIG BBQ at the Ballpark event went directly to this program that is recognized as the country’s first one-on-one mentoring program for military children. JLG (pictured with Phil Pace) greatly appreciates all of those serving in the military and strives to continue protecting children in San Diego County. 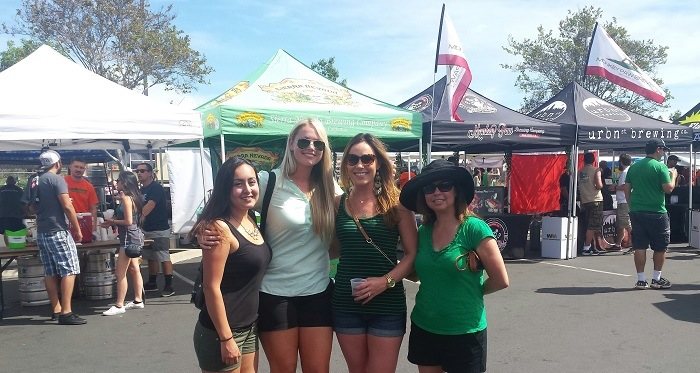 To raise awareness and funding for people with developmental disabilities‚ Jurewitz Law Group Injury & Accident Lawyers attended the EC Craft Beer Invitational on March 17‚ 2015! The event took place immediately after the St. Patrick’s Day Half Marathon in sunny El Cajon and brought together craft beer enthusiasts‚ 40+ breweries‚ gourmet food trucks and live entertainment. All proceeds went directly to local organizations that help serve adults and children with developmental disabilities‚ including St. Madeleine Sophie’s Center‚ Partnerships with Industry‚ and Noah Homes. The firm had a fun‚ memorable experience at the event and is pleased to have helped build bridges toward a more successful future for adults living with developmental disabilities. 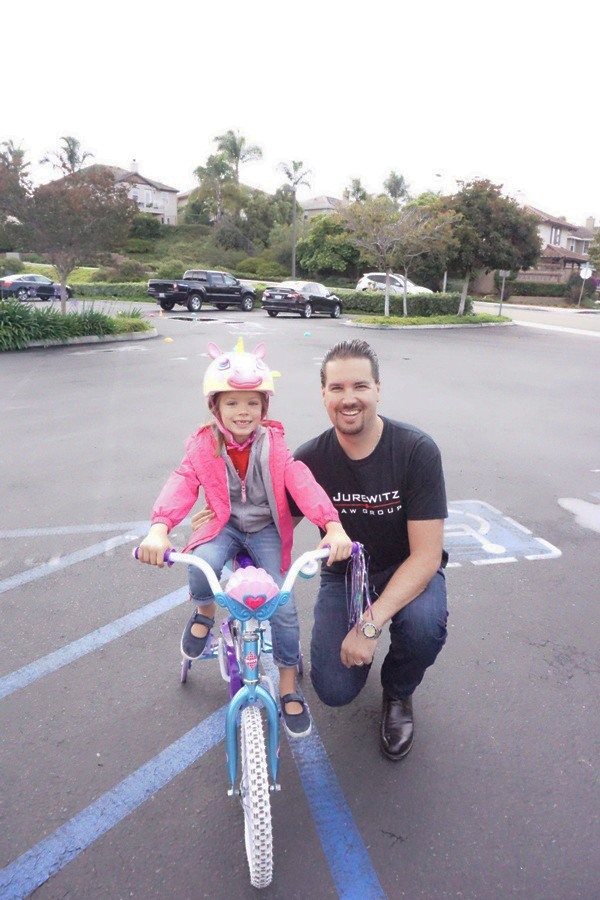 The Jurewitz Law Group Injury & Accident Lawyers is so proud of our youngest team member Ryan Jurewitz for participating in the recent St. Jude Trike-A-Thon fundraiser at her preschool. Ryan was able to raise an impressive $710 of her school’s total $1‚140 donation to St. Jude Children’s Research Hospital. St. Jude is an amazing pediatric treatment and research facility dedicated to saving the lives of children diagnosed with cancer and other life-threatening diseases. Every dollar that Ryan was able to raise‚ thanks to the generosity and support of numerous donors‚ will allow St. Jude to continue its efforts to improve cancer treatment worldwide and ensure that no child is denied treatment and that every child never receives a bill from the hospital for anything‚ such as food‚ lodging‚ and travel.

Additionally‚ the St. Jude Trike-A-Thon provided a free educational program for Ryan and her classmates to learn the importance of riding-toy safety as well as helping others.

Thank you to everyone who supported Ryan and helped her raise funds that will make a difference in others’ lives! 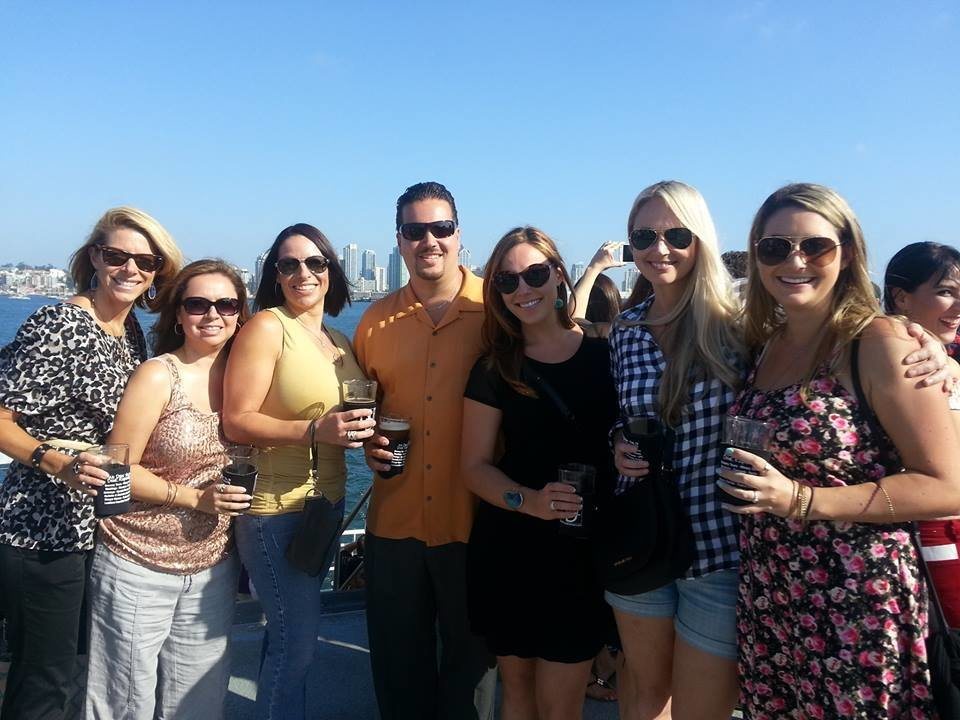 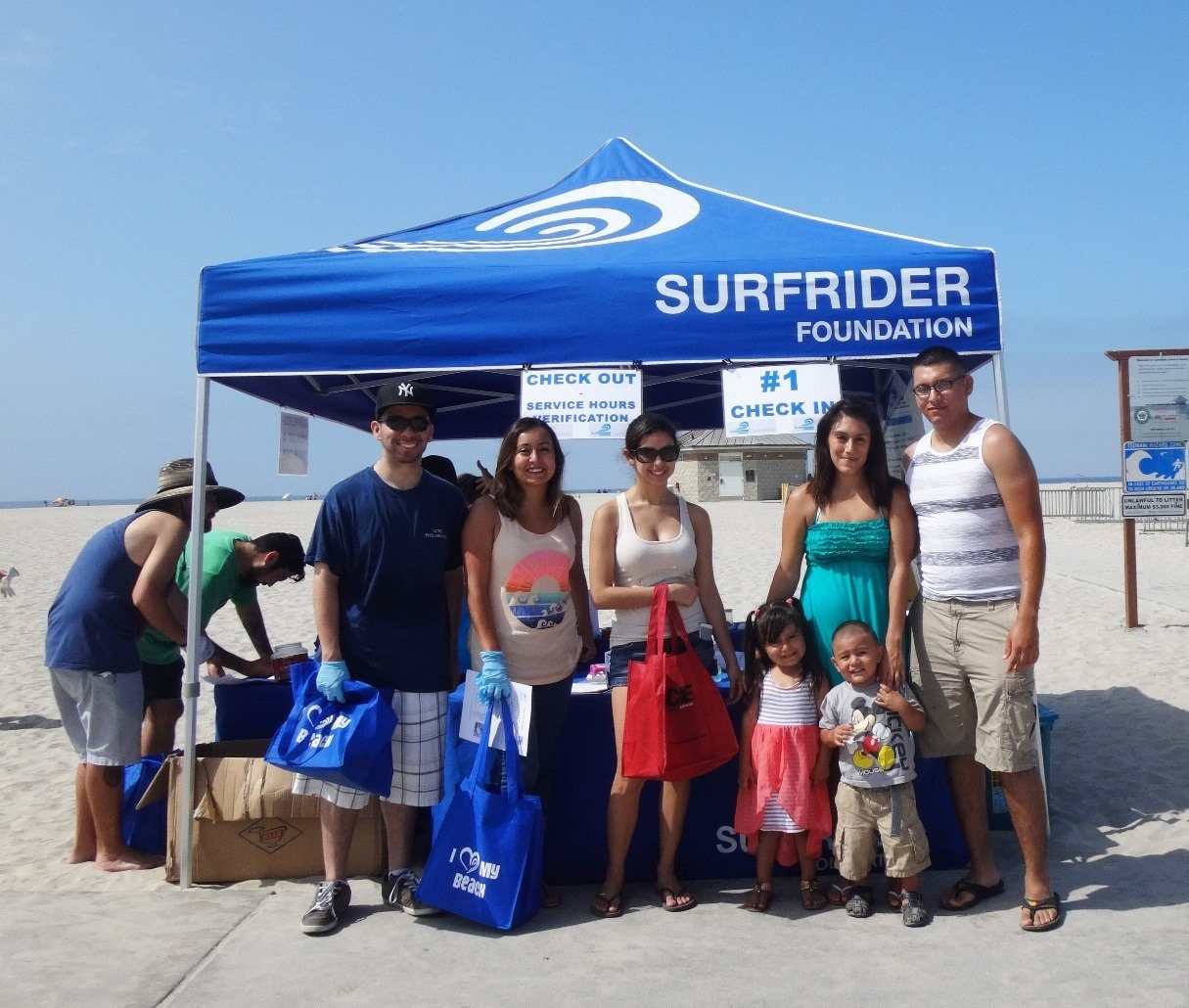 Jurewitz Law Group Injury & Accident Lawyers hit the beaches of San Diego once again to help maintain beach cleanliness and defend the San Diego coast. On July 26‚ 2014‚ the JLG team joined the non-profit environmental organization‚ Surfrider Foundation San Diego Chapter‚ at Coronado Beach to help pick up litter left behind on the sand and surrounding areas. After two hours of hard work‚ over 148lbs of trash and recyclables were gathered with the help of 116 volunteers! After a rewarding day of helping protect and preserve the world’s oceans and beaches‚ the JLG team will continue raising awareness about the importance of caring for earth and encourages everyone to please properly dispose of your trash and recyclables.

5th Annual Fashion with a Passion 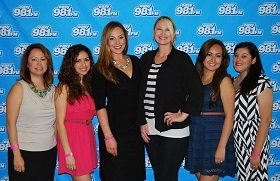 In support of Make-A-Wish® San Diego‚ a few JLG ladies attended the 5th Annual Fashion with a Passion at FIDM in Downtown San Diego on Saturday‚ April 5‚ 2014. The event honored Christina‚ a 16-year-old girl who underwent a successful bone marrow transplant for stage 3 Hodgkin’s Lymphoma. To help Christina’s ’shopping spree’ wish come true‚ the Jurewitz Law Group Injury & Accident Lawyers sponsored the event by donating $1‚000! The event was filled with entertaining activities such as shopping‚ makeup presentations‚ raffle drawings‚ a photo booth with 98.1 FM radio and a live fashion show by Project Runway star‚ Brandon McDonald. The JLG team felt privileged to be involved in Christina’s big day‚ as well as facilitating in helping grant future wishes for other children suffering from various illnesses. 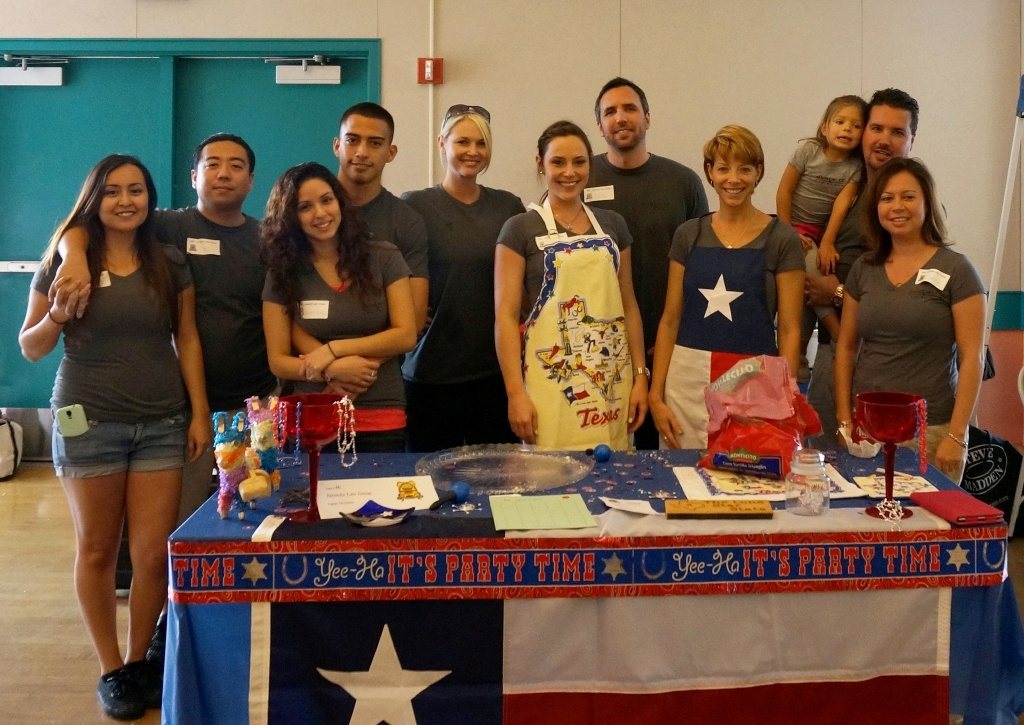 As strong advocates for injured and disabled victims‚ the Jurewitz Law Group Injury & Accident Lawyers happily took on the challenge to help support SPORTS for Exceptional Athletes in the 11th Annual Guacamole Bowl on February 22‚ 2014. To help raise funding for the nonprofit organization that provides recreational activities to those with developmental disabilities in San Diego County‚ the JLG team created a special guacamole recipe to enter into the competition. After serving an estimated 2‚000 event attendees the Jurewitz Spicy Guacamole with Queso‚ the JLG team received a commendable 500 votes and helped SPORTS for Exceptional Athletes raise nearly $12‚000! 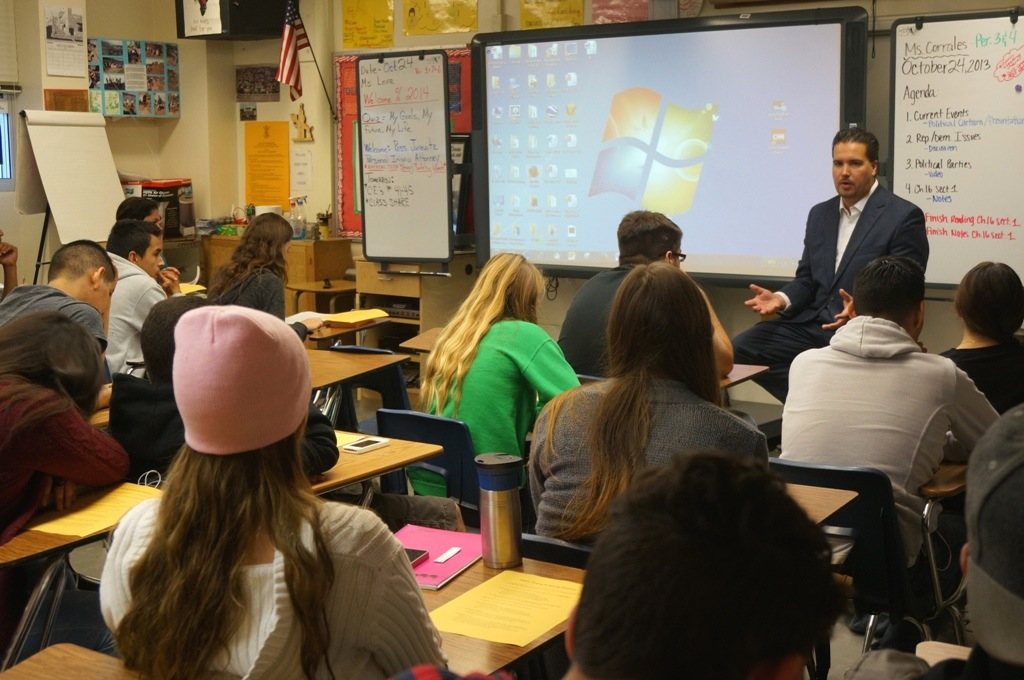 To spread awareness of the true dangers and consequences of texting and driving‚ Ross Jurewitz visited Point Loma High School to reach out to 60 senior students on October 24‚ 2013. The students participated in several exercises to better understand just how dangerous texting and driving is and willingly opened up to Mr. Jurewitz to learn more. After the discussion‚ the students got to look at a real crashed vehicle on campus (thanks to Rancho Del Oro Towing). As a result of Mr. Jurewitz’ educational presentation‚ all 60 students signed a pledge to not text and drive! 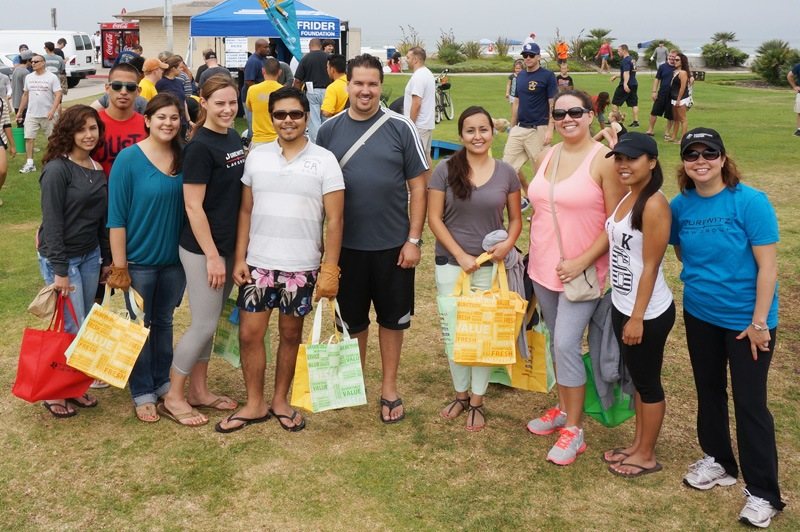 With San Diego beaches typically more congested with beachgoers during the summer‚ the Jurewitz Law Group Injury & Accident Lawyers recognizes the essential need to maintain beach cleanliness. To promote a cleaner San Diego and raise awareness of the negative effects of beach litter‚ JLG joined forces with Surfrider Foundation San Diego to clean South Mission Beach on July 27‚ 2013. To thank all participants that joined JLG‚ a free house cleaning prize was raffled on behalf of the Jurewitz Law Group Injury & Accident Lawyers. Together with the help of 257 volunteers‚ a total of 124 lbs of trash‚ 55 lbs of recyclables‚ and half of a 5 gallon jug filled with cigarette butts were properly gathered and disposed of. 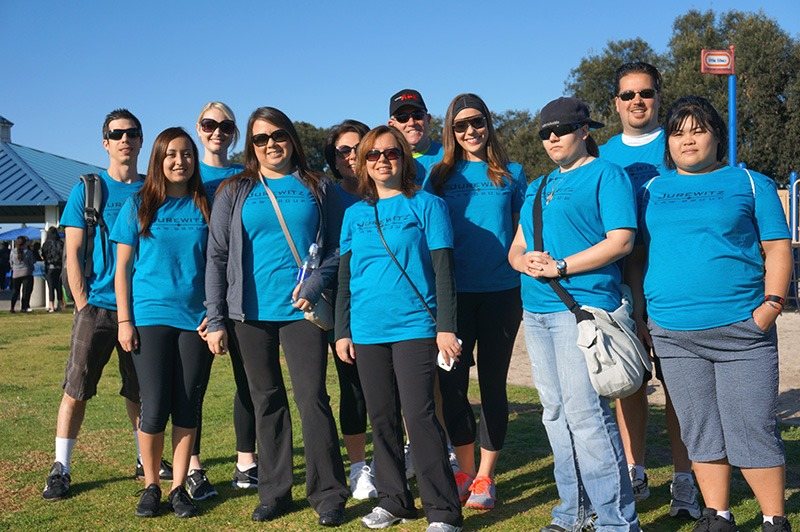 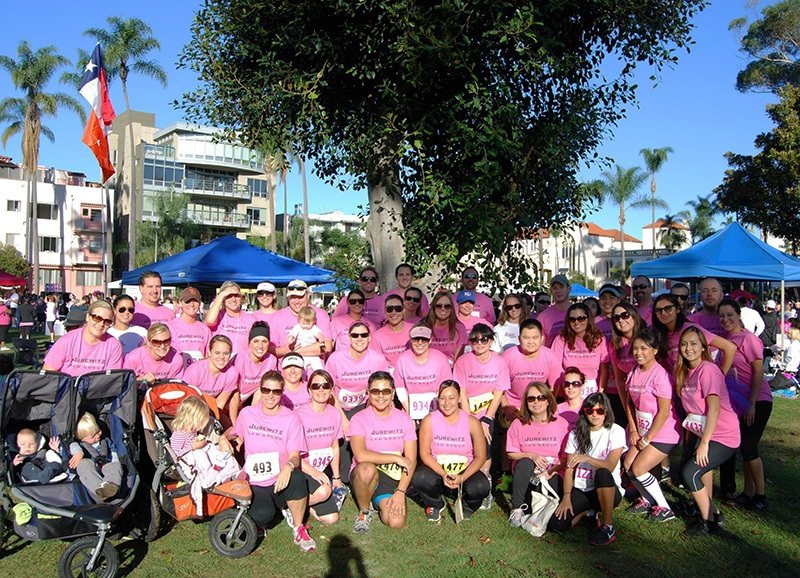 In October 2012‚ the Jurewitz Law Group Injury & Accident Lawyers was devastated to learn that Attorney‚ Lee Jurewitz‚ was diagnosed with bilateral breast cancer. To show their love and support of Lee’s fight against breast cancer‚ JLG united and gathered a race team of over 50 participants in only two weeks to participate in the Race for the Cure: San Diego 5k at Balboa Park on November 4‚ 2012! From the tremendous support from family and friends‚ the Jurewitz Law Group Injury & Accident Lawyers team raised over $3‚000 to help the Susan G. Komen for the Cure® continue the fight against breast cancer. 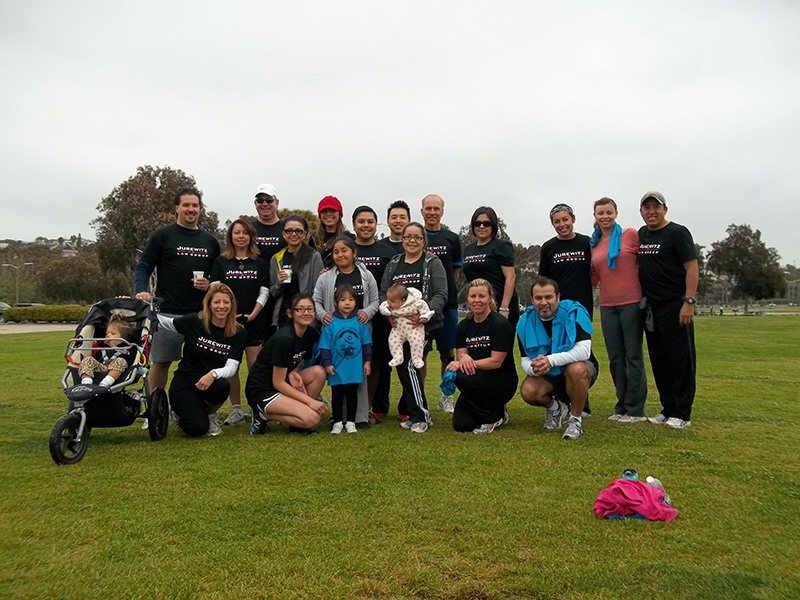 A total of seven hundred participants gathered to support the Brain Injury Association of California‚ Freedom House‚ and the San Diego Brain Injury Foundation at the 5th Annual Walk for Thought. To raise awareness of brain injuries in the community and to show love and support for those affected by brain injuries‚ the Jurewitz Law Group Injury & Accident Lawyers formed a team of 20 participants to walk/run a 3-mile course at Mission Bay on Saturday‚ March 24‚ 2012. Through the participation of the JLG team and others‚ the brain injury organizations were able to reach and surpass their $50‚000 fundraising goal that will help support brain injury survivors and their loved ones.

Our Desire to Help Our Community Does Not Stop with Our Clients. Here are Some of the Other Things We Are Doing to Help San Diego.

San Diego‚ CA is one of the best places in the world to live. The Jurewitz Law Group Injury & Accident Lawyers is dedicated to helping San Diego become even better‚ to help out those less fortunate to improve their lives‚ and to help local and national charities acheive their significant and important goals.

During 2010‚ the Jurewitz Law Group Injury & Accident Lawyers is working on two charitable projects‚ one of which will help San Diego’s schools and the other which will help to fight one of the leading causes of death in America.

We are a supporting sponsor of Teens Against Distracted Driving (T.A.D.D.) which encourages teens and their parents to keep teens from texting while driving. As a sponsor‚ the Jurewitz Law Group Injury & Accident Lawyers is helping local schools‚ PTA organizations‚ and youth organizations raise money for their organizations through the sale of molded rubber wristbands (like the ones used by LiveSTRONG). Our office will purchase the rubber wristbands at our cost and provide them free of charge to these organizations to sell to parents and teenagers who take the pledge not to text and drive.

Our office is also contributing a percentage of our profits toward the fight against cancer through the National Ovarian Cancer Coalition. Ovarian cancer is often an overlooked form of cancer and is one of the hardest types of cancer to detect. Once it is detected‚ it is often too late.